The debate „Directions for the promotion of Poland from the perspective of the Wielkopolska Region”, 22 October 2015 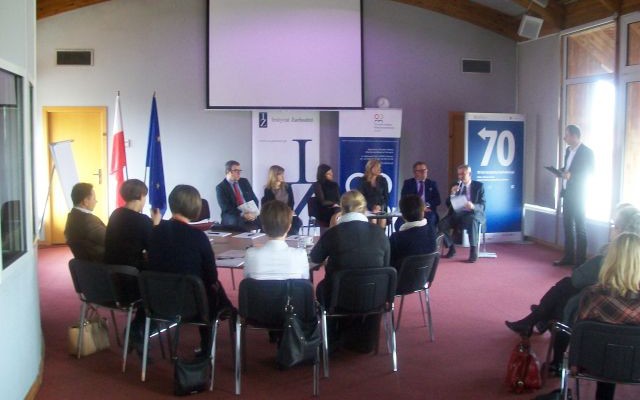 October 22, 2015 in the conference room of the Institute for Western Affairs was held a debate entitled „Directions of promotion of Poland from the perspective of the Wielkopolska Region” organized by the Regional Centre of the International Debate and…

October 22, 2015 in the conference room of the Institute for Western Affairs was held a debate entitled „Directions of promotion of Poland from the perspective of the Wielkopolska Region” organized by the Regional Centre of the International Debate and the Ministry of Foreign Affairs.

In the first part of the meeting spoke the experts: Jan Grabkowski – District Administrator of Poznan, Anna Domańska – head of the Department of Strategic Initiatives of the Department of Public and Cultural Diplomacy, Ministry of Foreign Affairs, Andrzej Łyko – President of the Polish Chamber of Commerce for Importers, Exporters and Cooperation , Dr. Szymon Ossowski from the Faculty of Political Science and Journalism, Adam Mickiewicz University, Anna Gruszecka – Director of Raczyńscy Library, Nicole Kulesza – President of the local branch of AIESEC Poland.

Panelists noted that branding our country abroad is very important for the further economic development of Poland. Dr. Ossowski emphasized the role the foreign media play in the promotion of Poland, these traditional, but also new social media that shape the image of our country in their countries. Andrzej Łyko noted that only direct visits by representatives of companies, entrepreneurs from abroad bring the desired effect, which is the increase in the number of foreign investments in our country. Both Anna Gruszecka and Nicole Kulesza stressed the importance of promotion of the country by its people. Polish brand may be our artists like Chopin, Wieniawski or Sienkiewicz, but also students who participate in all sorts of exchange programs.

In the second part of the meeting, which took the form of workshops, the voice was devoted to invited guests, among whom were representatives of the Marshal Office of the Wielkopolska Region, Poznań City Hall, chambers of commerce, Poznan universities, cultural institutions, local authorities and youth organizations. On behalf of the Polish-Indian Chamber of Commerce participated in the debate: Mr Stanislaw Wszelaki, Chairman of the Council and a member of the board of Flex Films Europa Ltd. and Anna Kobierska, Director of the Chamber. The participants worked in three groups: entrepreneurs, representatives of cultural institutions and universities, local government representatives and youth organizations that have developed conclusions and recommendations to be included in the document that is created by the Council for the Promotion of Poland which aim is to establish a strategic framework for the promotion of Poland abroad.