Seminar India-Central Europe with the participation of the President of the Board of Polish-Indian Chamber of Commerce Mr. Ryszard Sznajder 20 April 2015 r., European Economic Congress Katowice 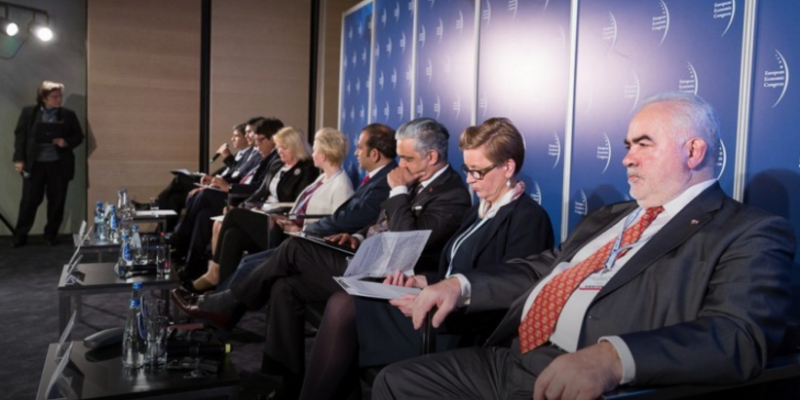 Ryszard Sznajder, President of the Board of Polish-Indian Chamber of Commerce participated in the panel discussion „The economic meeting of the India-Central Europe”, which was held on 20 April 2015 in Katowice within the European Economic Congress. The Congress is…

Ryszard Sznajder, President of the Board of Polish-Indian Chamber of Commerce participated in the panel discussion „The economic meeting of the India-Central Europe”, which was held on 20 April 2015 in Katowice within the European Economic Congress. The Congress is a three-day series of more than a hundred debates, meetings and accompanying events with the participation of 6,000 guests from Poland and abroad. Topics include the most important issues of the economic and social development of Europe. Congress is reported every year by hundreds of Polish and European journalists, media and news agencies.

In the panel discussion on Polish cooperation with India took part 9 panelists, representing the Ministry of Economy, Polish Information and Foreign Investment Agency, the Embassy of India in Poland, and Indian and Polish business organizations.

Mr. Ryszard Sznajder informed about the perception of Polish business in India, in the future, and now – once Poland was an important partner, enjoying a good reputation among Indian entrepreneurs. To this day,  we are well viewed, but we do not use our chance. According to Mr. Sznajder Poland and Polish business generally „slept” opportunities for cooperation with India in the last 25 years and unfortunately the blame for today’s low trade largely lies on the Polish side. After 1989 the Polish business has focused mainly on the European markets, losing sight of the Asian markets. Mr. Sznajder suggested that this state is gradually changing, but far too slowly. Awareness and knowledge of Polish entrepreneurs about business opportunities in India and Indian partners is still low. Meanwhile, India is a country and a market with unlimited possibilities and according to the main financial institutions soon the globe’s largest economy. Today India and Poland today are very different countries than those of 25 years ago, so we have to re-teach each other.

According to Mr. Sznajder apart from entire industries, such as mining Poland and India have much to offer each other in almost all areas in the sphere of small and medium-sized enterprises, on which the Polish-Indian Chamber of Commerce has been focusing since its establishment. Only in recent months mining has been named as one of the main directions of Poland-India cooperation, while the Chamber deals with this topic for a long time. India is keen on developing its mining industry, and no one has better technology, machinery and specialists than Poland. Mr. Sznajder said that this is an area of ​​great opportunities for our companies. Apart from the mining industry panelists also discussed the export of apples to India – President Sznajder confirmed that Poland had not on time took care of creating the possibilities of exporting apples to alternative markets, including India. The Chamber since last summer has been generating export channels, but these are hindered by phytosanitary issues.